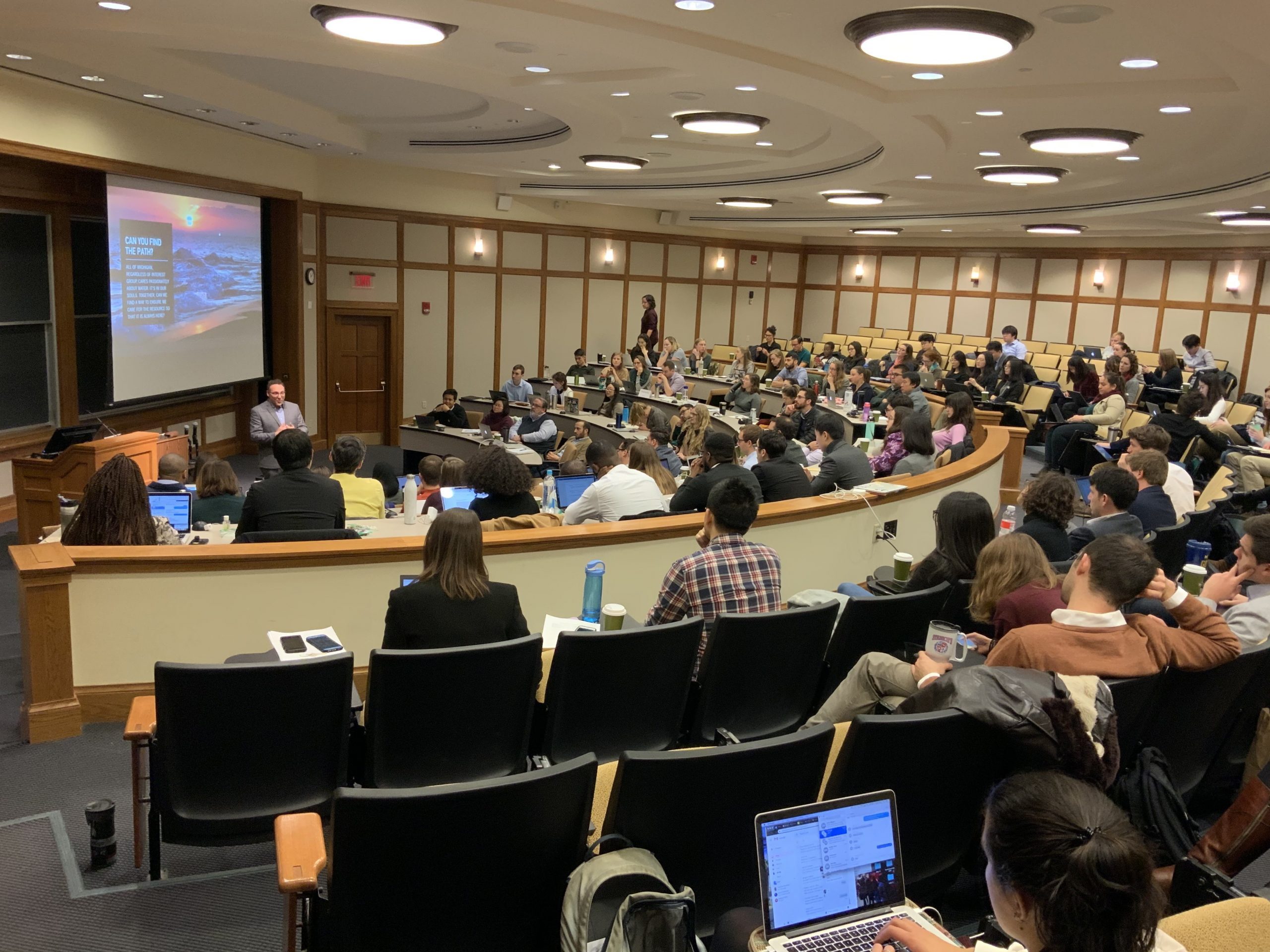 Ford School of Public Policy’s Integrated Policy Exercise (IPE) is a mosaic of moving parts. For the two-day event 170 master’s students role-play different constituencies of a notable policy issue in a real-time simulation of a negotiation process.

Each student needs to be engaged at all times, and the event adapts as students interact with the simulation and different scenarios play out.

With an event like this policy exercise, it’s hard to imagine organizing such an undertaking without some kind of advanced technological backing, but creators once planned the event through extensive excel spreadsheets and scenario-mapping. Then, faculty leaders had the idea to simplify the operation through designed software. They turned to the Center for Academic Innovation. Their idea became what is known today as ViewPoint.

ViewPoint was created by Elisabeth Gerber, associate dean for research and policy engagement, Jack L. Walker, Jr. Collegiate Professor of Public Policy and the Center of Academic Innovation team. It is a software tool designed for creating and managing customizable role-playing simulations.

The tool allows for the assembly of roles and activities inside the software, where changes to scenarios can be easily modified in a centralized system. During the event, participants can collaborate with each other in the portal and be informed about players, events and decisions through a real-time activity stream. In turn, faculty moderators can track participant usage.

ViewPoint has greatly augmented the experience students have with IPE, said Cohan Smith, lecturer at the Gerald R. Ford School of Public Policy.

“Actively engaging up to 170 students for a two-day exercise is a daunting challenge, especially since the event can take unexpected turns,” Smith said. “ViewPoint has given students a better experience overall by allowing for seamless adaptation to the simulation and the ability for all participants to easily communicate with each other in the platform.”

IPE begins in December when the students are briefed on the issue and on the role they will be playing. The simulation itself occurs in January in the few days before the semester begins.

Students are divided into teams representing different groups with a stake in and varying viewpoints on an issue, such as lobbying groups, political parties, and professional organizations. With each of these teams, students role-play different real-life players in these situations, such as legislative leaders, community stakeholders, journalists and researchers.

Throughout the event, participants communicate on the platform and use the live feed and message board to display their messages and get across their goals and ideas. The platform also allows for negotiations, breakout rooms and voting between groups.

Akin Olumoroti, master’s student in the Ford School of Public Policy and graduate student instructor for the event, believes this communication feature of VIewPoint is one of the most imperative factors to the students’ accurate experience of a policy process.

“Perhaps the most important lesson I hope students take away from the IPE exercise is the importance of clear and consistent communication in policy making,” Olumoroti said. “ViewPoint, perhaps inadvertently, facilitates this lesson.”

The 2020 exercise was Water Infrastructure Financing in Michigan, which dealt directly with the Flint Water Crisis. This simulation brought Michigan farmers, local authorities, legislators, and environmental and social justice organizations in conversation with one another.

“The integrated policy exercise was an eye-opener with regard to what constitutes policymaking, especially where the stakes are high for the parties involved,” Rateng said. “I learned that […] leadership and emotional intelligence are imperative for a policy issue to be resolved effectively within a short time.”

Through ViewPoint, IPE tests students ability to make sound decisions under “real-world” constraints and pressures, and allows for a truly individualized and engaged experience in policy making.

“ViewPoint became a really powerful tool for us,” Smith said.

During LCC, student teams role-play as senior business leaders in the middle of a business and media crisis. Through the ViewPoint platform, the team receives incoming information in the form of emails, phone calls and social media updates as the crisis unfolds, and the team has to evolve their strategy and response as the crisis unfolds.

ViewPoint plays a critical role in the flow and organization of the event, and the tool was specifically remodeled to fit the Leadership Crisis Challenge.

Collaborate with the Center for Academic Innovation The center works with faculty to create innovative software solutions for in and out of the classroom. The technology has reached more then 85% of current students across U-M schools and colleges. Faculty can personalize existing software for their classroom or propose a new tool to be incubated and designed with CAI. Learn more here.