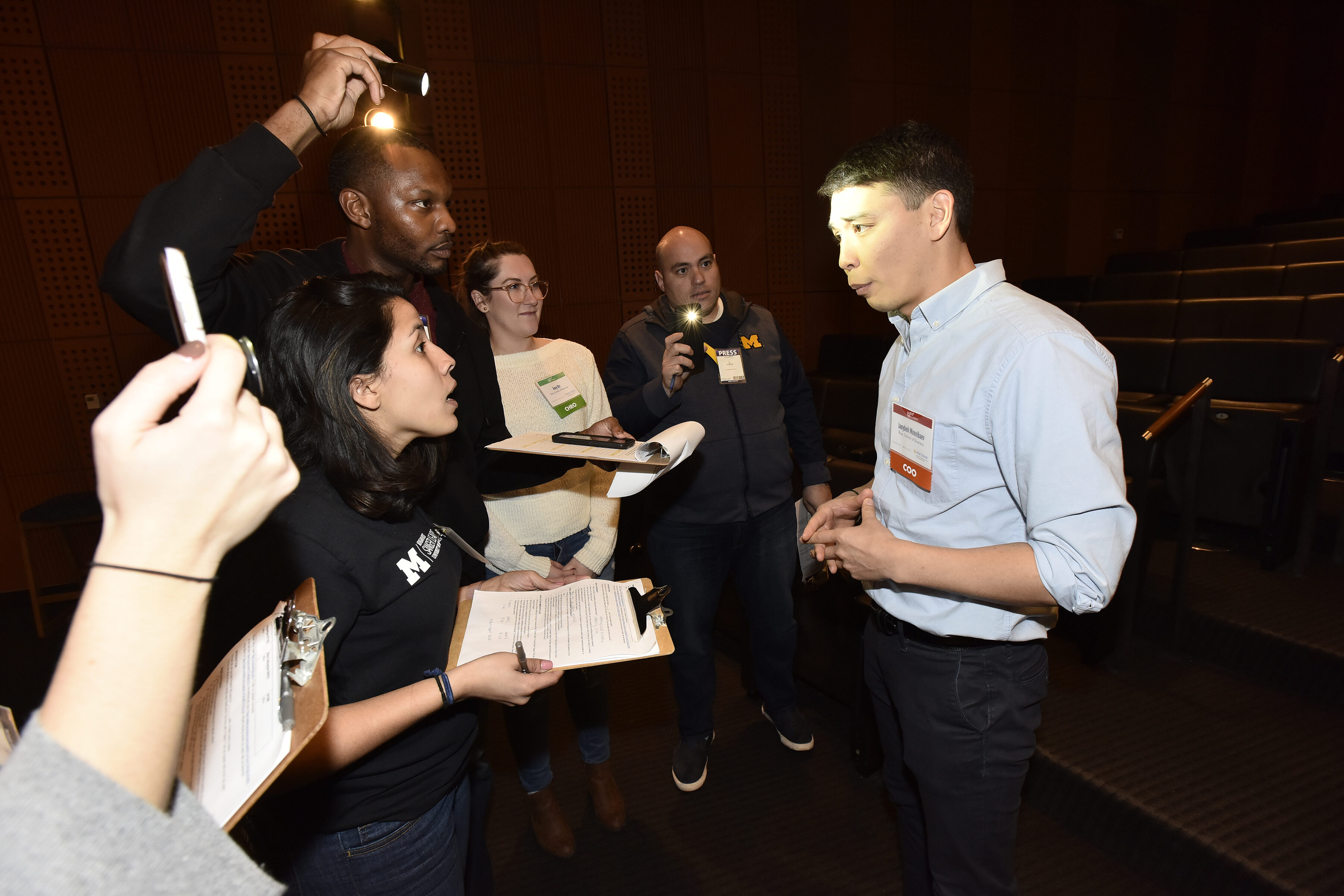 Ross grad crisis challenge day images: Students immersed in a business and media crisis faced a media ambush and were front and center for a press conference.

Over the course of two weeks, one group of University of Michigan students was tasked with fighting the opioid crisis. During the semester, another class determined the fates of students seeking admission to universities. A third group at the Ross School of Business found out what it was like to be ambushed by media during a business crisis.

Though their work was hypothetical, a simulation tool brought these situations to life.

ViewPoint is a digital tool that allows educators to make and implement simulations in the classroom. Students are assigned roles to play and are given information about the characters they’re representing. 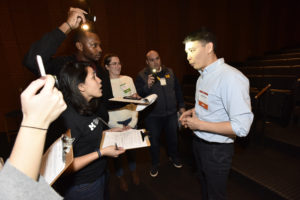 Ross grad crisis challenge day images: Students immersed in a business and media crisis faced a media ambush and were front and center for a press conference.

They then use ViewPoint to look over the simulation content, communicate with other participants via email or tweet-style updates, and help make decisions that determine the progression of the simulation. Real-time updates or breaking news delivered by facilitators on ViewPoint add complications to the simulation.

In the U-M course, “Health Management and Policy,” students used ViewPoint to participate in a simulation based on Ohio’s opiate task force. The task force was created in January by Ohio Gov. Mike DeWine to combat the opioid epidemic.

The students were placed in interprofessional roles working to address the opioid crisis, each based on a real member of Ohio’s task force, community-based organizations or local, state and national agencies. These experts come from a variety of backgrounds, including law enforcement, substance abuse services, disease prevention, health care and more. From there, the students in local organizations formed coalitions while the experts compiled recommendations.

“It was eye-opening to learn how much organizations are doing to tackle the epidemic from all angles, from Narcan distribution programs to recovery housing,” said graduate student Marissa Natzke.

“Within the simulation, it was clear that communities as a whole knew what they needed to tackle the epidemic. It wasn’t really about coming up with new ideas but increasing capacity and collaboration.“

The students researched their roles and studied how the members’ professional backgrounds would impact their beliefs and strategies. After learning other perspectives through the simulation, the students wrote up evidence-based intervention reports for the hypothetical DeWine.

“We wanted our students to understand multi-sector collaborations and see how all these people come together,” said Sharon Kardia, U-M professor of epidemiology. “It was amazing to see them tackle such a tremendously ambitious task and produce such bright, professional and mission-driven work.”

The opioid simulation will be used in U-M’s new online Master of Public Health degree, and is an adaptable resource that could be expanded to students in other disciplines across the university.

Another U-M course using ViewPoint is “Video Games and Learning,” taught by Rebecca Quintana, a lecturer at the School of Education and learning experience design lead at the Office of Academic Innovation. The course focuses on the ways in which video games can be used in education to challenge students and maximize learning. 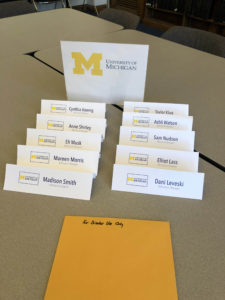 One course had students play the roles of admissions counselors for a number of universities, including Harvard and the University of Michigan.

Quintana decided to implement a simulation in her class because she wanted her students to understand how simulations allow participants to be actively engaged in complex, interactive scenarios. After Quintana and her team brainstormed on simulation ideas, they settled on undergraduate admissions to universities.

“We decided on admissions because it’s something everyone can relate to, but the process is somewhat opaque,” she said. “Students don’t know the mechanisms behind it, and for that reason, we thought it would be motivating for them to learn about.”

The students in Quintana’s class were assigned roles in ViewPoint as admissions counselors for a specific university and given information on each university’s admissions stance. From there, they read hypothetical applications stored in ViewPoint and worked with each other to decide whether or not to admit students. The applications included information such as a student’s GPA, test scores, extracurriculars and academic interests.

“The roles are a big part of this simulation,” said Raven Knudsen, a U-M graduate student in educational studies who helped design the simulation. “When you’re assigned a role, you can see a person’s secret mission and biases. This helped us add conflict to the simulation.”

Robert Moeller, a senior undergraduate student in Quintana’s course, said it was interesting to participate in the simulation just days after news of the college admissions scandal broke. Moeller, who was assigned the role of a college admissions counselor for Harvard, had difficulty making decisions when an applicant had connections to the university or their parent had donated a significant sum to the university. 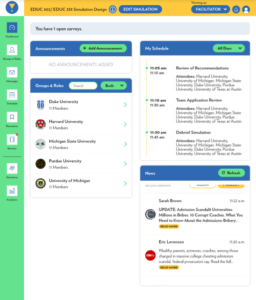 ViewPoint was originally created after Elisabeth Gerber, a professor at the U-M Ford School of Public Policy, found a need to streamline her policymaking simulation.

“I was doing a large-scale simulation in my class with over 150 people that spanned multiple days, and I organized it all with pencil and paper,” said Gerber, who also is associate dean for research and policy engagement at the Ford School.

“But the simulations started to become more complicated. So I reached out to Academic Innovation, keeping in mind from the beginning that we might want to expand its applicability beyond this use case.”

Now, ViewPoint is used across U-M’s three campuses and in classrooms at other universities, including Ball State University, Boston College and Michigan State.

While ViewPoint has streamlined the process of designing a simulation in the classroom, Gerber noted that simulations can still be challenging to implement due to the time and effort needed. Because of this, the ViewPoint team plans to build a set of templates instructors can use to adapt the tool for their own course content.

“I think ViewPoint will be very useful in the future,” said Chengzhi Qiao, a U-M graduate student in educational studies who helped build the admissions simulation. “Participating in simulations is unlike any other activity. Students aren’t just passively receiving information.”

ViewPoint also was recently used to facilitate the Leadership Crisis Challenge at the Ross School of Business, where teams of students were immersed in a simulated business and media crisis. Students played the roles of senior executives and had to think on their feet as the crisis unfolded.

“ViewPoint allowed us to encapsulate the challenge in a single platform rather than make our participants navigate multiple tabs and windows,” said Evan Marie Allison, associate director of the Ross School’s Sanger Leadership Center.

“Students walked away with insights on how to make strategic decisions that impact a number of stakeholders, manage ambiguity and uncertainty in the face of adversity, collaborate with a diverse team and develop an executive presence. It also helped the facilitators navigate, track and manage the 30 teams in one dashboard.”