Put on a VR headset and step into your film studio. You’re no longer a student in an introductory-level film class — you are a cinematographer.

Check out your surroundings. There’s a set in front of you: thick ribbon-ruched drapings, a king-size canopy bed with lace ivory frillings, painted animals frolicking on the coffered ceiling, and a large expanse of space with furnishings that could only be circa 1940s. You are inside of “Citizen Kane” (1941), when Charles Foster Kane, played by Orson Welles, abruptly destroys his second wife’s bedroom after she leaves him. The scene in the film ends in the climactic moment where Kane gingerly picks up a snow globe among the wreckage and says the iconic word, “Rosebud.”

In front of this scene is your camera.

You’ve been tasked with re-creating a scene from one of the most famous films in history. Where do you start? You can change the camera distance, the camera angle, the framing, the movement of the camera — and you have complete autonomy.

Use the left thumbstick to move your virtual self in space; the right to rotate around the virtual room. Press B to grasp the camera. Squeeze your hand into a grip to manipulate the camera knobs and handles; use the pan-handle on your tripod to change the direction and angle of the camera.

You’ve studied the movie extensively in class and mapped out the six shots that made the scene. You worked with your team to design a reshoot of the scene, to reimagine it. You get to decide which shots would illustrate the scene, the mood, the emotions, in the way you want it; you get to completely alter how the audience experiences the material.

The titular character Citizen Kane waits for you at the door of the room — the start of the scene — for you to press record. 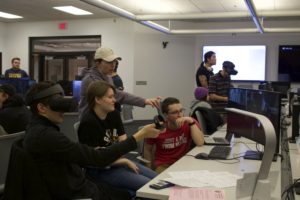 Introduction to Film, Television & Media (FTVM 150) students have the unique opportunity to get out of the lecture hall in Angell Hall and get some hands-on experience with filmmaking. Reshooting this scene at the Duderstadt Center Visualization Studio via VR technologies is one of the assignments for the semester, and this is the pilot term for this experience. Using the Oculus Rift, the VR headset, was a new experience for many students.

“I didn’t exactly know what to expect before beginning the assignment. I haven’t had any prior VR experience, so I was expecting it to be a little difficult as I needed to get oriented to the tool,” said Allison Kasparek, LSA sophomore in cognitive science, “however, I was pleasantly surprised at how intuitive the tool was, and I felt that my group was able to dive right into the assignment in no time.”

Students worked in small groups to analyze the original, collaborated to plan shots and how they wanted to portray the scene, and took turns using the headset to film it. Students like LSA Sophomore Lindsey Dye enjoyed the opportunity to work with new technology that they had never experienced before in the classroom.

“I had never used VR before this project and I was both excited and nervous to use it for the first time,” Dye said. “I didn’t know what to expect or how it would really feel to use VR but being able to just try it for the first time and watch my group mates do the same and have fun was the best part!”

Matthew Solomon, associate professor in the FTVM Department, said that creating this experience for students was a technological and pedagogical effort among many departments on campus to give students the opportunity to complement doing film analysis in the abstract. Following a close examination of film clips and pictures, the students then get first-hand experience making creative decisions that impact the finished form of a film. Solomon said there couldn’t be a better way to do that than re-examining a masterpiece such as “Citizen Kane.”

“Students are analyzing one of the greatest films of all time,” Solomon said, “and given the freedom to think about: how would I do it differently? This is an opportunity for students to think critically about how a multitude of individual factors impacts the experience of a film while creating their own variations together as collaborators.” 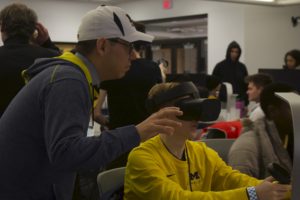 The clip from the movie was modeled by developers in the Duderstadt Center Emerging Technologies Group in collaboration with Solomon and FTVM Ph.D. candidate Vincent Longo, who directed a motion-capture session with a professional actor to recreate the frenetic action of the scene. The Citizen Kane VR project was funded by grants from LSA Technology Services.

“Being in the room and seeing the set that the designers emulated from the original film was super interesting and engrossing,” Noah Wing, LSA freshman studying FTVM. “It allowed me to really sink into the role of the cinematographer and try to make the most interesting product I could. It also worked surprisingly well with very little lag, delay, or any other hindrance.”

The Citizen Kane VR project was supported by the Center for Research on Learning & Teaching, (CRLT) Foundational Course Initiative, a push to transform large introductory-level courses to better engage students in lecture-style classrooms. FTVM 150 is one of six chosen in the first wave of redesigned courses, and this assignment was one of several aspects that have been improved in the course. 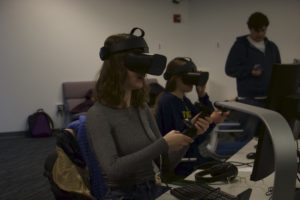 concepts in a way they would not normally be able to in a course,” said Anthony King, Instructional Technology Consultant at the Foundational Course Initiative (CRLT), “It helps them create a deeper understanding of the concepts. While XR experiences can sometimes be difficult and time-consuming, these immersive experiences are also very exciting and can inspire students in ways other kinds of projects might not.”

This project was also made possible by the Center for Academic Innovation XR Initiative, whose designers consulted on the rollout of the project and the implementation of the tool into the

curriculum. XR Initiative leaders are interested in learning from this experience to determine how best to support large scale efforts like it to use XR technologies for teaching and learning.

“The XR Initiative will be working with faculty across campus to bring more of these experiences to students over the next three years,” Jeremy Nelson, director of the XR Initiative, said, “Our goal is to create a professional services offering for any faculty on campus that want to use XR technologies for teaching and learning.”

Overall, students say they have gained a unique outlook on the film process, especially as 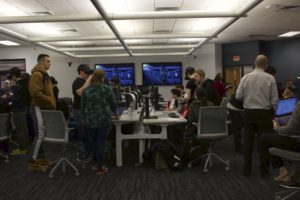 this experience was many students’ first entrance into using a camera.

“I do think using this VR tool helped me understand filming as I have only ever used simple video cameras or my phone to record videos and never seen anything like a real movie set,” Dye said. “Being able to use a more realistic movie camera in VR and be able to navigate around the set and characters really helped me get a better feel for the filming process.”

“It was really cool to be able to use the equipment to make this famous scene from “Citizen Kane” our own,” said Kasparek, “and having that virtual experience as if we were in the filmmaker’s shoes was an incredible opportunity.”

“I think that this tool specifically helps the students to deepen their understanding of the film terms that we cover in the introductory film course,” said Bailey Compton, a Graduate Student in the LSA Transcultural Studies Program and GSI in the FTVM 150 course, “It may be one thing to read the definitions of certain film techniques on the page, but I think the students found that it is quite another to practice getting certain perspectives and angles on their own in the VR environment.”

U-M’s Library holds the most extensive international collection of resources from Welles’ life and career.