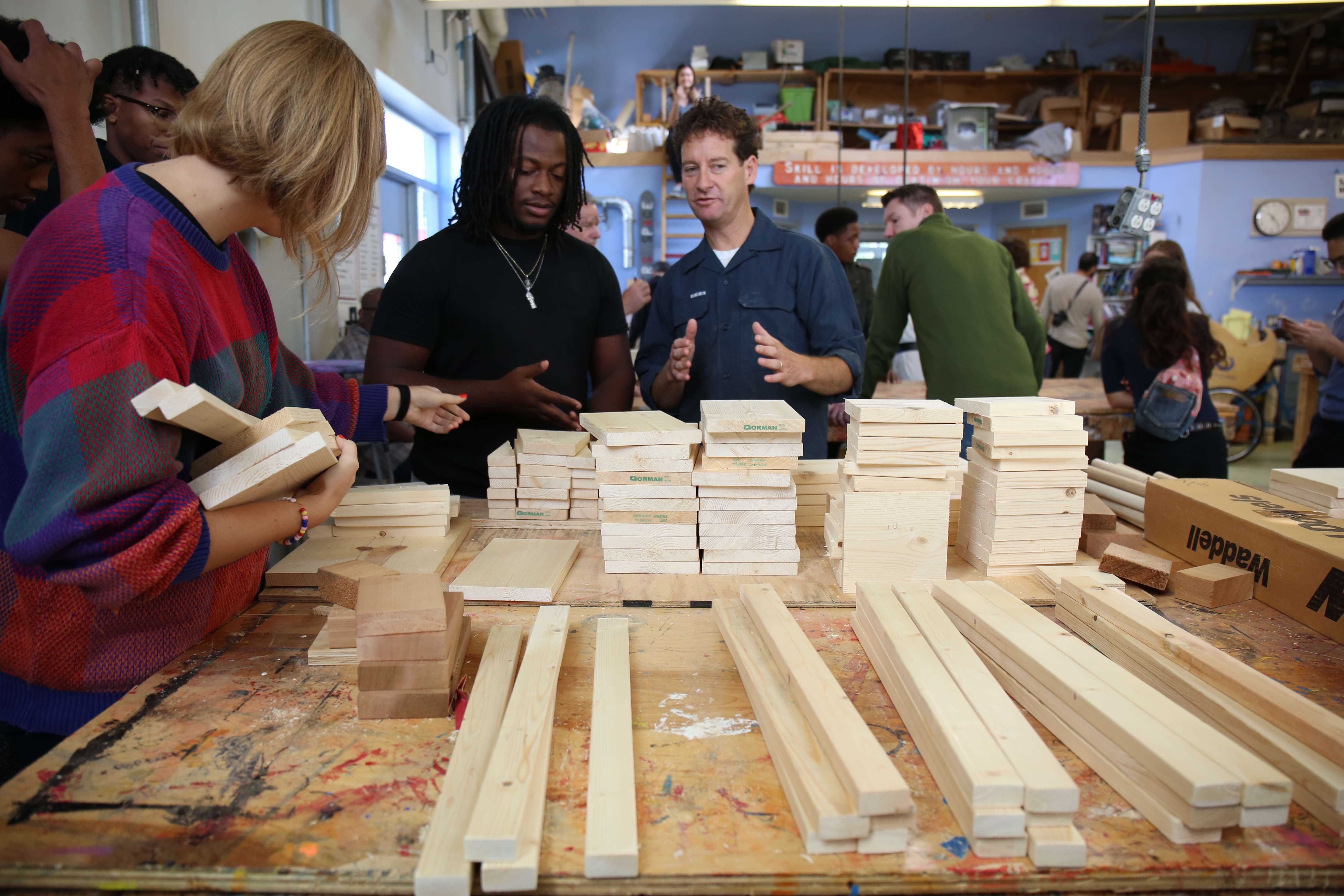 Nick Tobier at a workshop held at the Brightmoor Maker Space as part of the 2017 Detroit Design Festival and in collaboration with Ishinomaki Lab in Japan and the Center for Japanese Studies. Photo by Joey Ostrander.

As the Detroit Community Schools and University of Michigan’s Penny W. Stamps School of Art & Design celebrate the first anniversary of the Brightmoor Maker Space in Detroit, co-founder Nick Tobier, professor in the U-M Stamp School of Art and Design, professor of the Center for Entrepreneurship and the Edward R. Ginsberg Senior Counselor to the Provost on Civic Engagement, reflects on what drew him to the art world and how an artist becomes interested in civic engagement.

I’m a Libra. I’ve been here at Michigan for 15 years. I grew up in New York City and I always think that there’s no such thing as an uninteresting place. But one of the things I learned growing up there is that every street was different than every other street, even if it looked similar.

As a kid I would go with my grandmother every week to the Metropolitan Museum of Art and we’d go look—she was an artist and we’d look at one thing each week, it was her choice, and then we could go look at the knights in armor, that was my choice. Through that I was aware of things, but I never thought that I would be an artist in any way. I went to a small liberal arts college and I took an art history course freshman year because it was one of the things I had never heard of and I thought it would be interesting. And after one of the artistry lectures I sort of wandered into the studios—they’re in the same building—and I thought, “oh people can make these things.” And that was it.

Can you tell us more about your time as an artist in New York?

So I had this windowless room and I’d walk through these streets where people were doing things, and things were happening and it was exciting.

The first thing I made is I noticed there were these giant puddles when the snow and ice would melt and the corner catch basins would puddle up, get filled up. So people would either have to walk through this big lake or they’d go to the middle of the street where it was less safe to cross. So I made this bridge that I would station in the middle of a giant puddle to help, and people could cross that. But it was necessary for me to be there to drag it from place to place. I was really interested in the interaction and the things people would say. I remember this couple saying “it’s so great the city finally sent someone to do something about this.” And that it could be at all mistaken for something official was really interesting to me. I’d see burly Wall Street guys in their suits and dress shoes sort of wind up into a giant run and use the bridges. And they’d give me a high-five or something. But I knew that the interaction part of the work was as important to both its reason for being and its success. So that was the way that I started, by bringing things outside and engaging with people, and then the engagement work became more the foreground. There’s no way now that I would build something completely speculatively without getting to know a context, a neighborhood, a group of people who would be affected by it. And recognizing that the presence or the impact of my work is based on privilege in a lot of ways. That I have a job and an education and an idea, that my ideas are interesting. And so I can’t just put things out there without asking or without inquiring.

What are some of the engagement experiences you carry with you?

When I was in graduate school in landscape architecture I had this summer fellowship, which was called a community service design fellowship. So many of the classmates went to work in private practice, which I also did, designing landscapes for multi-millionaires that probably should never have been built ecologically. But one summer I went to work for the New York City Parks Department in the Bronx and the project was to design a park, which was great. So I was going to sit in this great little office with a window, and I was going to draw this thing and someone was going to build it. Like the third day, the door opened and this woman was standing in a park uniform and she said, “What do you want me to do with all these kids?” I said, “What kids?” She said,”These kids here. They’re being punished and I was told that you are supposed to deal with them.” And so there were 40 seventh graders who had been bad in some way, you know, they’re doing summer detention. And, apparently, they understood community service to mean that I would take care of them. And at first, I thought it was the worst thing that was ever going to happen. But they were really filled with charisma and neat kids. They were from the neighborhood in the Bronx where we were going to build this park. So instead of building it from the presumption that I had of an idealized form, we worked together. We walked around the neighborhood and they pointed out things that they had noticed, places where they felt happy or unsafe, and businesses where they knew people. And over the course of the summer we developed a really fantastic approach to what would’ve been a pretty ordinary approach in my hands. So I understood how much fun that was, how much I enjoyed working with them and how much better it made the work that we did because we did it together.

What are some considerations you take into account when working on engagement projects?

I think there are times when I have to check myself—that I recognize my best role is to be as in the background as possible. So I think that’s pretty formative to how I think about successful engagement is recognizing the sort of power dynamics that there are to do my best to transcend them and help other people do the same.

U-M has increased outreach in Detroit. What do those relationships look like?

There are some community members who will see what we’re doing as wonderful, see what we’re doing as elitist, see what we’re doing as horrible, they don’t want any part of it. And there’s no way that we can completely distance ourselves from that because quite frankly there’s that full range of that spectrum. You know there are projects that come in as sort of heavy-handed that claim a lot of territory and credit for the university where really so much of the interest in Detroit comes from the complexity of the city. And we have to recognize and continually understand that we’re guests and it’s an opportunity not a privilege to be taken lightly that we get to interact with  what I would say is one of the most interesting cities in the world. And so to always be humble in that presence. I don’t think we’re always aware of the size of our reputation or the presumption of our reputation or the presumption of our resources. And to understand that, because of that there are often people who will say ‘yes’ when it’s really a burden for them. So it’s complex, and I think it’s up to all of us to try and understand the full complexity of it—even if you’re well-intentioned or even if you’ve been working for years with a partner—to recognize that we’re not a monolith, nor is the city of Detroit a monolith.

As you’ve been engaging in Detroit and personally developing, the city has been developing rapidly. How has that affected the dynamics?

Detroit is developing unevenly, rapidly in some places and less rapidly in others. And in the places where it’s rapid there’s a high degree of saturation, and in the places where it’s developing less rapidly there’s a high degree of suspicion or resentment. So I’ve been working in the same neighborhood with the same partners now for almost 10 years right and there’s more and more U of M activity. And so there’s a temptation to say what were you guys doing before, like what’s all the rush in right now. And at the same time it’s not just us, it’s not just U of M, it’s Michigan State. It’s also recognizing that Wayne State is another research university that’s in Detroit. Recognizing that there are programs from Liverpool or Dusseldorf that come in with architecture students, and they’re looking at things. They’re developers and there’s pressure. So when I first started encountering and engaging in Detroit, I never would’ve anticipated that there would be this much rapid gentrification, displacement and changes in the retail and cultural landscape.

How do you practice self-care?

Well I play soccer at least once if not three times a week. So there’s a presentness when your heart is racing. That is really centering in a lot of ways. Your mind sort of shuts off except for your immediate task. I really like having a team that I can rely on and that’s not unlike the partners I work with in Brightmoor—that’s why I’m still there. It’s all based on interaction, but the interaction that you get from being committed to someone and their ideas and aspirations that might not always match up exactly with yours. But it’s the growth of that that I think feeds the social and intellectual inquiry, that makes both the soccer team and the engagement something. I also read fiction first thing in the morning before I check my email. So I just finished this book called “Sourdough” that’s a novel about a coder in Silicon Valley who leaves her job at a start-up to be a baker. First thing in the morning I always want to enter the imaginative portal that reminds me that there’s more than life as an artist. Like one of the greatest things is that you have an opportunity to imagine a world that you want to see happen.