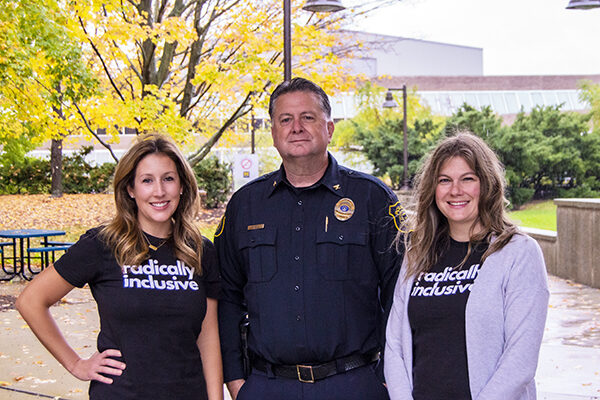 Autism, also known as Autism Spectrum Disorder or ASD, is a neurodevelopmental disability that affects communication, social interaction, and behavior. The CDC estimates there are over 5 million adults living in the United States who have ASD and a 2016 study shows that 1 in every 54 children aged eight has autism.

Autistic people often have difficulties with social interaction. They may avoid eye contact, appear to not be listening, have difficulty with back and forth conversations, and be unable to predict or understand other people’s actions. For these reasons, interactions with law enforcement officials can become increasingly escalated and dangerous.

Former school teachers turned associate professors in the School of Education & Human Services Melissa Sreckovic and Christine Kenney have worked to make their classrooms more inclusive for years. Now, they have turned their attention to public safety interactions with law enforcement officers.

“The four- and five-year-olds Melissa and I used to teach are now young adults. They’re out in society and they’re engaging in many different ways. We want to make sure that they’re going to be living in a world that is safe, and that the law enforcement community understands their needs,” says Kenney.

“A large part of our job has nothing to do with enforcing the law; it’s caring for our community, and individuals diagnosed with autistic are part of that community,” says Ray Hall, Director of Public Safety at UM-Flint. “When we’re well informed on autism, then our approach to the de-escalation process can be leveraged in a way that will be positive for all those involved and ensure that individuals diagnosed with autism get the assistance they need.”

Research shows that roughly 1 in 5 adolescents with ASD will be stopped and questioned by a police officer before the age of 21. Law enforcement can easily misinterpret autistic behaviors as being uncooperative, aggressive, or caused by narcotics. As a result, civilian injuries and fatalities during police interactions are disproportionately common among people with autism and other disabilities. Further, autistic people are five times more likely to be incarcerated compared to the general population.

Over the summer, Sreckovic and Kenney completed their first pilot professional development session with UM-Flint’s Department of Public Safety. During a two-hour session, the pair had the opportunity to train both front-line officers and dispatchers.

“One of our goals is to seek feedback from officers on the session about what they thought was beneficial, what we could add, and how they might use those skills in the field and in their practice. Our hope is to take that information and integrate it back into our training to make the best, high-quality training that we can for law enforcement officers” says Sreckovic.

Sreckovic and Kenney will provide training for officers across the greater Genesee County area this fall. In the future, the pair hopes to produce evidence-based professional development training that can be provided to law enforcement officers internationally.