The show must go on: Michigan Marching Band goes virtual 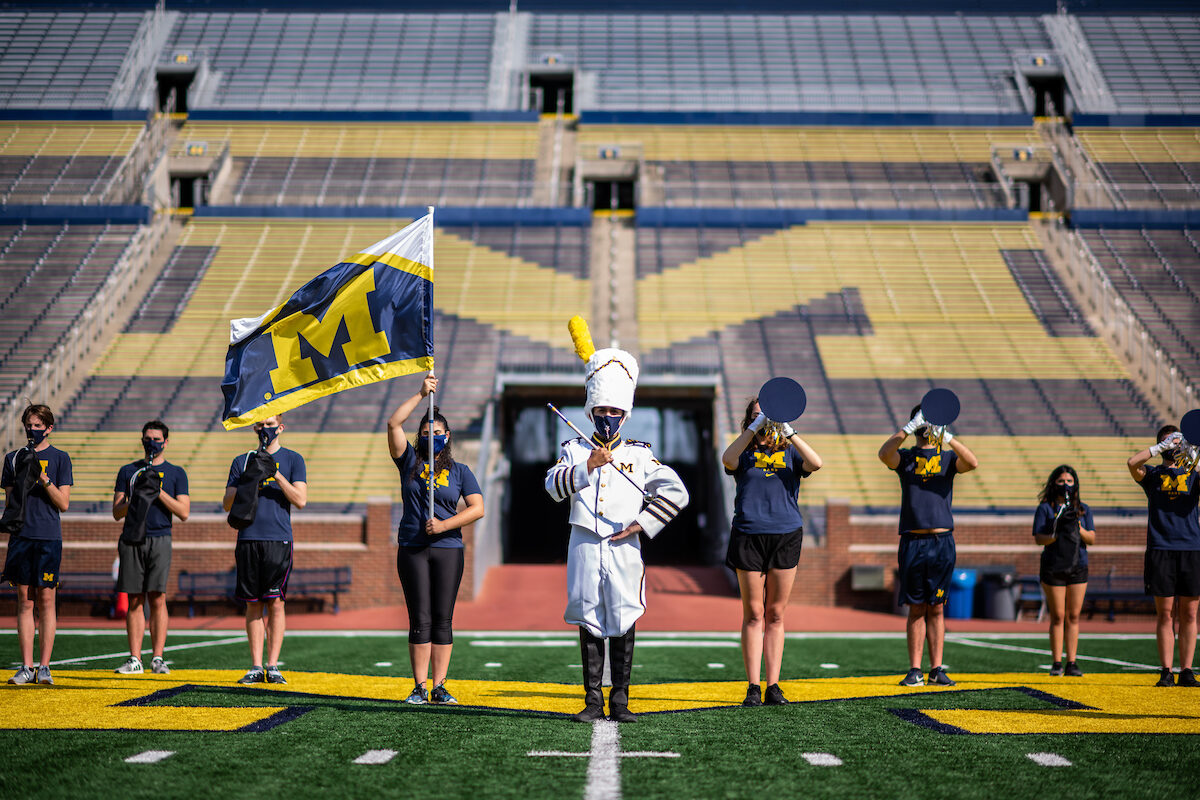 A small number of Michigan Marching Band members pose at the empty Michigan Stadium during a photoshoot. Photo by Eric Bronson/Michigan Photography.Stadium

For Walter Aguilar, there’s nothing quite like walking into an empty Michigan Stadium.

“This is the way it was the first time I walked into it almost four years ago,” said Aguilar, a University of Michigan senior and the Michigan Marching Band’s 56th drum major.

“Even after three years, going through the tunnel still gives me goosebumps.” By this time in the fall, Aguilar would have spent many afternoons and evenings practicing on Michigan Stadium turf, and yet, a photo shoot in September was only his second time in uniform on the field.

In fact, with the students surrounding him, the photo session marked Aguilar’s first time leading band members in person as the “Man Up Front.”  A senior studying public policy, he joined the marching band as a member of the horn section. Coming to U-M had always been a dream for Aguilar and, while the move from Grand Rapids to Ann Arbor was at times overwhelming, being a part of the band provided an immediate community.  Over the years, he was impressed by student leaders and felt compelled to lead as drum major himself. Such a goal usually takes years’ worth of auditions and practice.

“It’s an intense process,” Aguilar said. “The drum major should be the best marcher in the band, so you’re working on that constantly. Every day you’re trying to become a better marcher.”

In any other year, a Thursday afternoon would be consumed with pregame sequencing, marching formations and show rehearsals. For these musicians, their attention was largely focused on attaching the new personal protective equipment to their instruments and asking each other about remote classes.  Some of the students were seeing each other in person for the first time.

While it was announced that Michigan football would be returning this fall, the Michigan Marching Band will not be joining on the field.  For the first time in its 123-year history, the band has gone completely virtual.

While Michigan football continues on, with its first game Oct. 24, the marching band is preparing its first show, which will be released digitally in early November. Everything has changed, from how rehearsals are conducted to how students are expected to play their instruments in a health-informed, socially distanced way.