Lessons in architecture: 3-D without leaving the classroom (or living room) 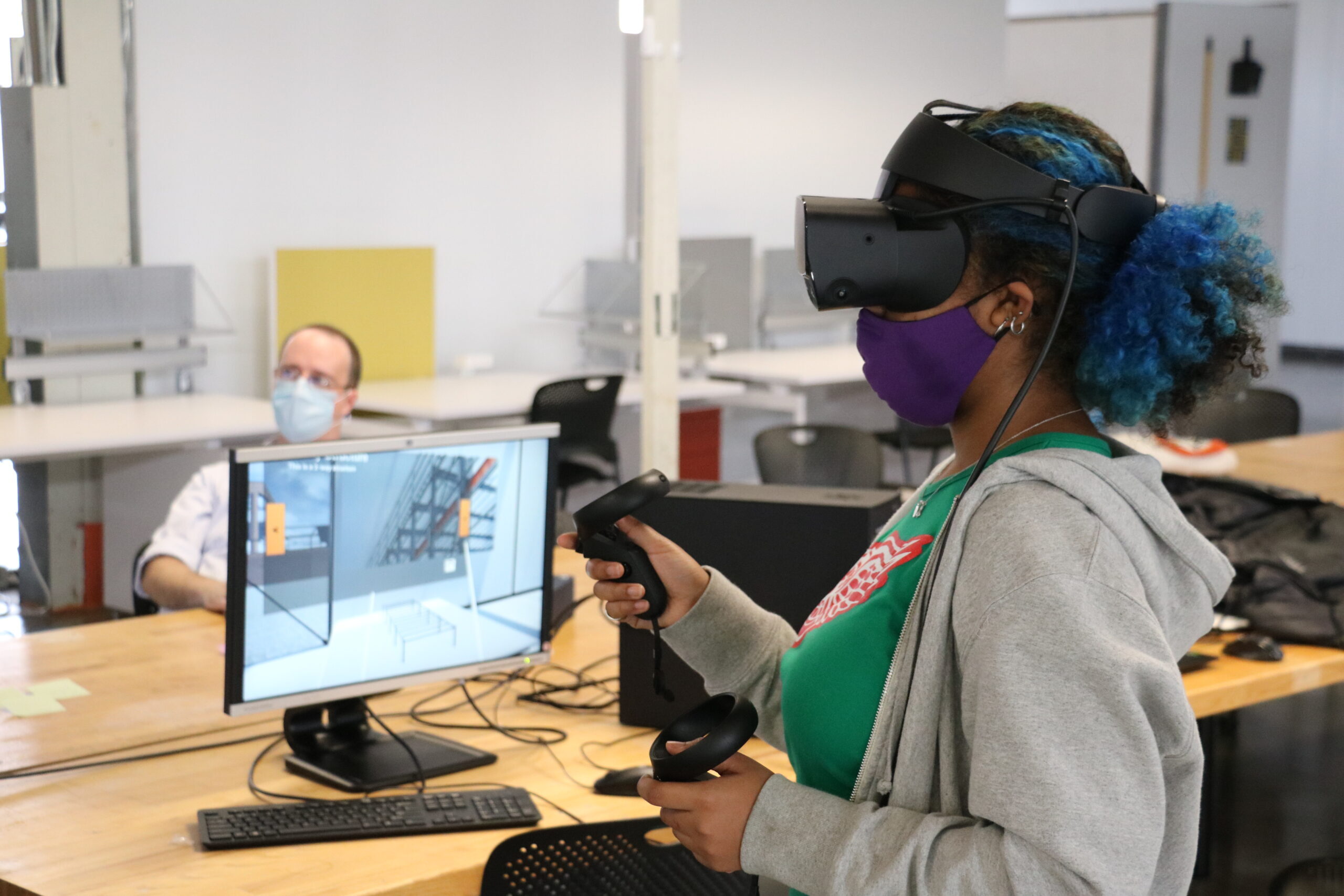 In previous semesters when architecture professor Jonathan Rule wanted his students to see firsthand the way various materials came together in construction he had to find a building project on or near campus and arrange for the class to walk through a site.

“It really helps to see the actual physical artifact as a way to understand how that 3-dimensional construct is translated to a 2-dimensional drawing,” said Rule, assistant professor of practice at the A. Alfred Taubman College of Architecture and Urban Planning. “We have fairly good textbooks but they don’t replace the onsite experience.”

Rule said he “got lucky” for a couple of years because the Taubman building that houses the architecture program and the nearby Veteran’s Administration were undergoing major construction projects.

“We know that every single year we can’t get a construction site visit,” he said, not to mention the logistics and liability involved with setting up a tour to only see one small part of a year-and-a-half to two-year building process. “How do we facilitate this kind of experience?”

With help from a Center for Research on Learning and Teaching grant Rule began the initial research and development of “Augmented Tectonics,” to introduce augmented and virtual reality into teaching. The virtual reality would provide a simulated construction experience. The augmented reality would involve a smart device app that would allow students to interact with 3D modeling and use the technology for design. A pilot last year showed modest success but also revealed gaps that would need to be addressed, Rule said.

He heard about the XR Initiative from the Center for Academic Innovation and its fund for faculty with ideas for using augmented, virtual and mixed reality technology in teaching. Rule and colleagues Craig Borum and Claudia Wigger, who teach large gateway courses that serve about 100 students a year, applied and were among eight projects funded in the inaugural year.

“We’ve gotten better at it but also we knew we needed additional input on how this actually should be done, so thankfully the XR Initiative came about.”

This semester students in Architecture 317 (undergraduate) or Architecture 417 (graduate) beta tested a mixed reality app that took them inside a building to learn about the materials—primarily steel. A handful of students used an Oculus Rift while others explored the program through an app on a computer.

Putting the Oculus headset on transported juniors Noah Kellman, Caitlyn Chua and Kilala Ichie-Vincent and graduate student Zoe Elliott into a virtual museum containing buildings such as the Farnsworth House in Plano, Illinois. Designed by Ludwig Mies van der Rohe, the national historic landmark is a canonical building that is an example of impeccable detailing using steel as the main material, Rule said.

The students described their experience as similar to the museum environment with various portals to explore, with the names of construction materials: metals, concrete, masonry, wood and glass. The only one ready for entry for the beta test was steel.

Through the portal information appeared on various pedestals, much like in a museum, but unlike those places where artifacts are “untouchable” the students were able to virtually put their hands on the material.

“Being able to hold something in VR was very similar to holding something in reality, Ichie-Vincent said. “That quality of it gave me a better understanding of what was going on in the class.”

The students all agreed coming into the class it is difficult to understand how construction materials come together, and seeing them through this new perspective helped clarify the relationships.

“Once I went through that portal it took me to another world, I guess you could say, and basically we found the class material we were learning in these buildings,” Kellman said. “One of the really exciting opportunities with VR, I think, is it can help students better articulate how something actually works. To me that was extremely invaluable learning. And the ease of doing it, too, is just incredible.”

The 3D aspect put it into perspective for Elliott.

“The objects were definitely in 3D in the VR environment so it wasn’t flat, it was actually tangible, you could see the depth within the objects,” she said. “It was like walking through a video game but you’re in the video game.”

In addition to showing students the way materials work together, the program offers design challenges, instead of weekly quizzes, where they can size the dimension of a beam, explain how to assemble a wall, try out a material to see if it works in an area of a construction project, or match a drawing to its 3-D space.

“It is such a great tool to see real human scale, which is something I feel we miss a little bit in architectural design, and how someone would truly interact with space, especially in terms of height and dimension,” Chua said.

It turns out, the idea to integrate the technology couldn’t have come at a better time, as COVID-19 shut down most of the construction projects on campus and forced the university into remote and hybrid learning.

“I think VR, especially in COVID is invaluable to actually be able to see it in 3D when you can’t go out somewhere, especially those who have health conditions or those who have other things to do, like parenting or a job,” Elliott said.

Rule said having the first trial helped the team zero in on what needed improvement or modification.

“It was also a positive thing because it also had us think about accessibility for all students,” Rule said. “So, some students we found last year get very dizzy when they put these headsets on. There is a bit of motion sickness that can be caused by these virtual reality headsets. Some people get over, some never get over it.”

They also found that immersion for more than 30 minutes leads to boredom.

COVID-19 has slowed momentum on full integration of the technology a bit, Rule said. A small VR lab in Taubman with VR headsets is part of the plan for the future.

In order to get more headsets into the hands of students, the Shapiro will also have a checkout program, courtesy of the Center for Academic Innovation, shortly after the first of the year, dependent on what happens with pandemic restrictions.

Moving forward, Rule and the team at the Center for Academic Innovation are planning on completing the remaining material modules and fully integrating it into the course for fall of 2021. In the future they are also discussing new directions and interdisciplinary collaborations around these technologies and their affordance they might have in aiding in spatial vision development across multiple disciplines.