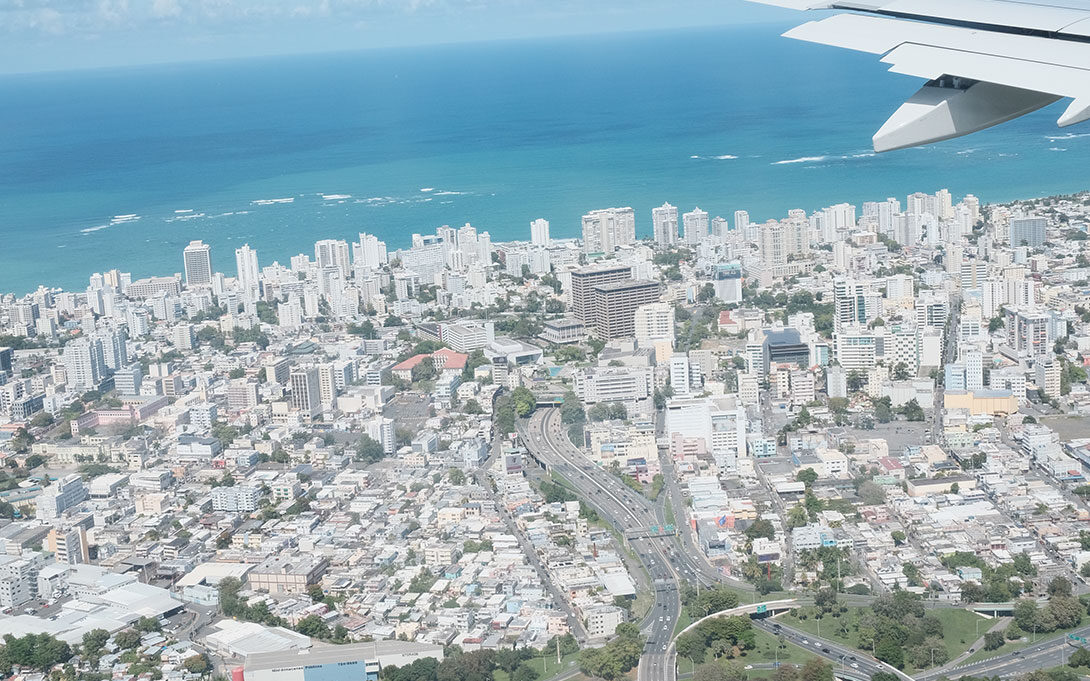 The International Economic Development Program (IEDP) took a COVID-required turn in 2022, exploring the economic, environmental, and cultural circumstances of the Commonwealth of Puerto Rico, a U.S. territory. As international travel restrictions caused by the pandemic were in flux, the students driving the program found the island a very suitable alternative.

Faculty advisor Jonathan Hanson noted that though Puerto Rico is not an independent country, many of the same issues that developing countries face are relevant, like resource scarcity, vulnerability to the effects of climate change, underemployment, and a difficult fiscal situation.

The 22 participants—19 students, one translator, and faculty members Hanson and Paula Lantz—stayed in the city of Ponce, about a two-hour drive from the capital of San Juan. That location made it easier for the groups to meet with non-profit organizations and local leaders, and also gave easier access to the countryside and its mountainous topography.

The students had spent seven weeks preparing for the week-long experience, studying background on four main areas: Fiscal Policy, Disaster Relief and Preparedness, Environmental Policy, and Poverty and Inequality. “All of these areas are tied together around issues of environmental and climate justice, and how major events like hurricanes or earthquakes affect different people differently,” said Isaac Nico (MPA ’22).

Disaster relief is an especially important area, as the island is still recovering from the monstrous Hurricane Maria in September 2017, as well as earthquakes in 2019 and 2020.

The first days required that San Juan trek so they could meet with members of the commonwealth government, representatives of U.S. federal departments including Housing and Urban Development and the Federal Emergency Management Agency and some consultancies. Always in the background was the question of Puerto Rico’s status as a commonwealth: should it remain a commonwealth, should it pursue statehood, or even become an independent country?

“There are a lot of opportunities for economic development because of the amount of money the U.S. agencies have, as well as the high levels of COVID relief,” said Maia O’Meara (MPP ’22), who is studying international policy, and was on the Fiscal Policy team. She will work at the General Accounting Office (GAO) after graduation and she said the experience showed her how federal policy affects local and indigenous communities.

Each of the groups met with community-based organizations, including Casa Pueblo, a communal organization that started as a protest movement against a mining operation and now counts thousands of members who work on sustainable forestry, solar energy, local agriculture, and environmental protection.

“Community organizations are filling in the gaps of what the commonwealth should be doing. They are doing it more efficiently; they are very community-oriented and grass roots. I was very impressed by the work they were doing,“ said Max Shpilband (MPP ’22).

Community organizations are filling in the gaps of what the commonwealth should be doing. They are doing it more efficiently; they are very community-oriented and grass roots.Max Shpilband

One group was able to tour a rainforest where they saw indigenous trees that had survived Hurricane Maria, while exotic and imported plantings did not. “They are defining what conservation can look like across the Caribbean because they have more resources than some of their neighbors which are smaller. Climate change affects them all,” Nico said.

Priyanka Panjwani (MPP ’22) met with the Brigade Solidária which is building roofs on the some 30,000 houses that still don’t have them even after over four years. “They are building resiliency in their communities—teaching skills and increasing confidence that they will be able to deal with any future emergencies better,” she observed.

The group was also able to swim in the Bioluminescent Bay, and took in the unique culture of the village of Loiza, which was settled by formerly enslaved Africans. They saw the local art, met with artists and artisans, and learned the Bomba, a dance of resistance.

IEDP president Selene Rangel (MPP ’22) worked hard to put the trip together. “I got a lot out of this trip, putting my management experience to work. It was fun reaching out to my fellow students, the Ford School leadership, and the alumni network with whom we met on the island. Those relationships helped with the trip’s design, and that networking skill is something that will serve me well in the future.”

“It’s an important part of the student learning process. They worked hard in preparation and continued to work hard when they were on the ground,” said Lantz. “It was great to have this immersive experience and to be able to hang out with these amazing Ford School graduate students.”